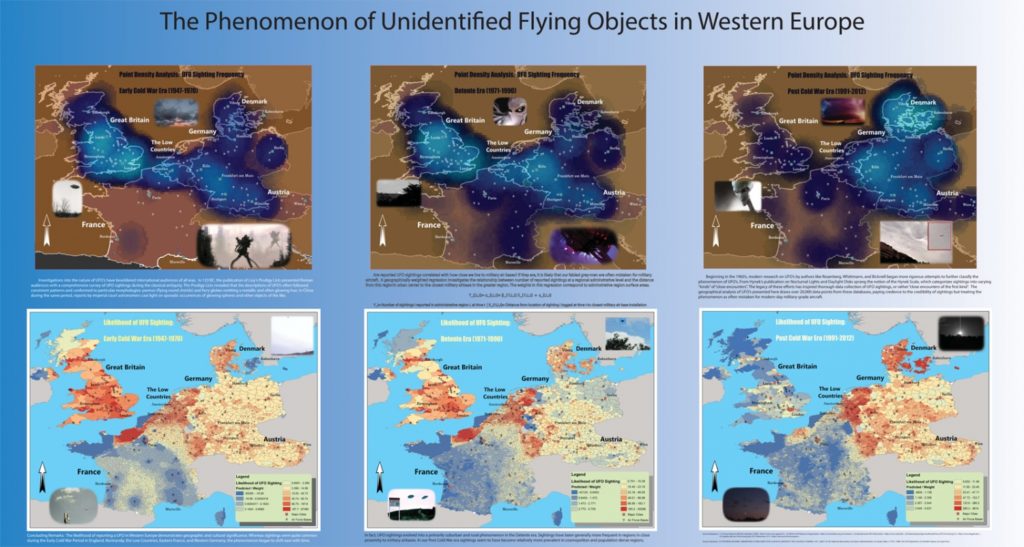 Where are UFO sightings most likely to occur in Western Europe and why? This geographical analysis finds that over the course of the last 60 years sightings have evolved from being principally a suburban phenomenon to a more cosmopolitan phenomenon. This analysis seeks to depict the geography of UFO sightings over three time periods spanning between 1947 and 2012. In particular, this study investigates the likelihood of UFO sightings in Germany, France, Britain, Denmark, the Netherlands and Belgium with respect to approximate distance between the location of a sighting and the closest military air base in a region. Data is drawn from European UFO Sightings Databases, particularly British, French, German, and Danish databases. Over 20,000 data points were used in this study and each point was supplied with attributes spanning from local address, coordinates of the sighting, and date and time of occurrence. This study also draws on spatial data containing the coordinates of publically known military air bases in Western Europe, which allows the analysis to study the “airbase effect” on the relative prevalence of interregional UFO sightings.[1] UFO sightings are a mostly cultural phenomenon but do occur more frequently near air bases. Point density analysis shows that during the early cold war era the phenomenon could be characterized as primarily an Anglo-Saxon concern. Particular regions like Normandy, the Low Countries, western Germany, and eastern France that shared close economic and cultural ties with England were also relatively more obsessed with the phenomenon in comparison to more rural regions. In fact, popular media in the U.S. and Britain often hyped-up the UFO phenomenon and these publications were marketed to European audiences.[2] In 2008, the U.K. declassified their “UFO Files” prompting many other western European countries to follow suit. [3] Consequently, in Denmark for instance, UFO’s have been popularized by the media which has had an effect on the predominance of modern sightings in Denmark relative to other western European countries. Danish sightings are now relatively more common compared to those of their other contemporaries—suggesting a “cultural catch-up”. Yet prior to the Détente era, UFO sightings were quite common in suburban Jutland compared to the more urban island of Zealand. In fact, geographically weighted regression analysis shows that sightings are now more likely to occur in cosmopolitan regions than in suburban ones. This demonstrates that the “media effect” now seems to be a greater determinant of the likelihood of sightings in cosmopolitan areas relative to the “airbase effect”. Supplemental Notes