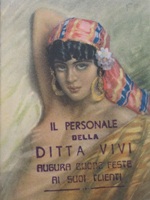 If we are to consider the cultural traditions of “Europe in the World,” we must also contemplate its mirror: the “World in Europe.”  In this collection of Italian calendari (pocket calendars), I catalogue how the military occupation of geopolitical territory precipitates the subaltern occupation of domestic artistic and commercial space.  With this exhibit, I illustrate the ways in which the Ethiopian Invasion leads to media preoccupation with the sexuality of East African women, characterized by the reverse flow of foreign bodies into local mass media via text and image.  When approached as a cohesive phenomenon, the creation of Italian East Africa (Africa Orientale Italiana, or AOI) and the proliferation of East Africans in the Fascist popular press epitomize this duality.  The Italo-Abyssian War (1935-1936) resulted in parallel flows of bodies to land and media: Italian soldiers invaded Ethiopia, while images of the occupied population (reduced to broad characterization as either “African” or “Arab”) saturated Italian magazines, advertisements, and commercial ephemera.  Two tropes emerge in this exhibit: the fusion of territorial and sexual possession and the conflation of person and product.  Historical inquiry coupled with archival media study foregrounds my argument – the practice of invasion varies according to local environment; in the space of mass media, Italian colonialism emerges as an act of sexual consumption of the racial other.

Conflation of Territorial and Sexual Conquest

The unique ephemera for this exhibit come from Modena’s Museo della Figurina, which specialized in erotic prints from the Italian Fascist period.  The now extinct form of mass media known as calendari demonstrate that terms like “consumption,” “appetite,” and “invasion” cross and blur the boundaries of geopolitical, commercial, and sexual invasion.  Italian barbershops distributed these perfumed, wallet-sized calendars to their male clientele to advertise cologne.  Prior to the Fascist period, illustrations accompanying the days of the month depicted idealized visions of the Italian countryside and its edible wares.  By the 1930s, beautiful women serving as human representations of the countryside became the illustrations of choice. Next to the month of March one might see a Sicilian beauty offering a basket local oranges. After the Invasion of Ethiopia, erotic portraits of East African women flooded this market. As the cover of the 1937 “Impero Italiano”[1] (“Italian Empire”) calendario (Fig. 1) suggests, the Regime placed the occupied territories and people of Ethiopia under the aegis of the Italian Empire, but not as part of the Italy nation.   The majority of East African women decorating this calendario appear as seductresses: they gaze up at the consumer through thick eyelashes (Fig. 1) or off into middle distance, their lips temptingly parted (Fig. 2).  Unlike calendarishowing Italian women, these Imperialist calendari portray Ethiopian women unclothed.  The calendario removes them from the physical context of the East African territory: they appear without backgrounds, and are all (un-)dressed in identical fashion: they sport fabric headpieces, hoop earrings, and flowers in their hair.  They softly smile (Fig. 2) or provocatively pose and pout (Fig. 1), indicating their sexual availability.  As an occupied population, mass media reduces these women to the status of a colonial product to both provoke and potentially assuage the sexual appetites of the conquering nation.

This calendario and others like it illustrate how the Fascist regime co-opted the bodies of the occupied to further political goals.  Put in commercial terms, ephemera such as this “pulled the old bait and switch:” sexualized images of Africans enticed young Italian men to enlist in the hopes of encountering such exotic creatures abroad, as Barbara Spackman notes in her literary study Fascist Virilities.  Scholars Ruth Ben-Ghiat and Stephen Gundle point to this collusion in their media studies and ethnographic accounts of the Ethiopian Invasion.  But once there, the Regime required participation in territorial, not sexual conquest.  Leaders of the Fascist Party strongly discouraged miscegenation even as Regime-approved mass media used erotic images of East African women to lure young Italian men to the military front.  Mass media’s enticement of Italian male sexual appetite provides a potent metaphor for the Regime’s territorialappetites.  And in fact, the only non-seductive female image in the calendario evokes this point on the back cover with a telling image.  This concluding image shows a Black Madonna-like figure, swathed in white robes, as she dandles a child on her knee.  Driving home the duality of military and sexual conquest, her precocious youngster fixes his gaze on the advancing crowd white Italian military troops emerging from the horizon, and gaily waves in welcome.

[1] Given “Europe in the World’s” word limit, I restrict myself to guiding the exhibit viewer through one calendario.  This tact provides a model for how the viewer might approach the other calendari images in the catalogue.

Need help with your research?